The Top 10 Health IT Trends For 2014: Complete Survey Results 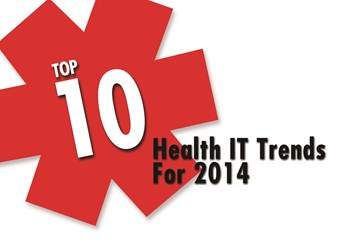 To identify the top technology trends, Health IT Outcomes asked each of the survey respondents to rank a series of technology initiatives in line with their implementation plans for 2014. For each initiative, respondents were asked to clarify whether the initiative was a “Top Priority,” a “Priority,” “Important,” “Somewhat Important,” or “Not Important At This Time.” Each response was then weighted. For example, all “Top Priority” responses were given a rating of one (1), while “Not Important At This Time” responses were given a rating of five (5). An average of the total ratings was then calculated for each IT initiative. The lower the cumulative rating, the higher the priority the technology project was to our survey respondents. This rating system was used to determine the top 10 health IT trends for 2014. A list of how all technology initiatives scored in our survey is presented below. In an instance of a tie in the average score, the percentage of “Top Priority” votes determined the higher trend number.