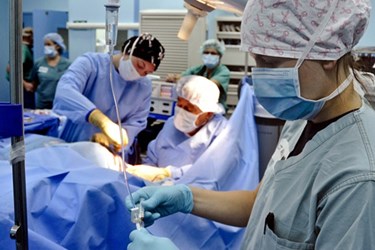 System of cameras records procedures for viewing later to identify errors and prep for future surgeries.

Taking inspiration from aviation, Canadian researchers have developed and are testing a surgical black box designed to record surgeons’ movements and reduce errors, according to CNN. The black box is a recorder for data from cameras positioned in the operating room. The logic behind the idea is that surgeons will learn from their mistakes by watching the footage to pinpoint root causes of errors. The footage can also be used to improve technique or prep for future surgeries.

By pinpointing mistakes and telling surgeons when they're veering "off course," a black box could prevent future slip-ups, says Dr. Teodor Grantcharov, a minimally invasive surgeon at St. Michael's Hospital in Toronto. Unlike the black boxes in aviation which are used after disasters occur the surgical black box Grantcharov is creating will be used proactively to prevent major patient complications.

"At this initial stage, we are analyzing surgeries to determine how many errors occur and which ones actually lead to bad results for patients," Grantcharov says. Not every error will result in a patient complication.

The black box will eventually assess everything from how surgeons stitch to how delicately they handle organs and communicate with nurses during high-stress situations. Error-analysis software within the black box will help surgeons identify when they are deviating from the norm or using techniques linked to higher rates of complications.

The technology has already been tested during 40 laparoscopic banding surgeries. Initial trials show surgeons recognize few of their mistakes during surgery and, regardless of experience, a surgeon makes about 20 errors per surgery. Researchers hope the black box technology can help surgeons understand the most common errors and how to best prevent them, regardless of whether they result in patient harm.

Despite the testing, there are still significant legal barriers to the black box technology. Grantcharov says a number of hospitals have already expressed interest in using the device, but the litigious medical environment may make its implementation problematic. If the recordings were used in court, they could open the floodgates to a new wave of malpractice concerns, which would be counterproductive to surgeons and patients, according to Grantcharov.

"We have to ensure the black box is used as an educational tool to help surgeons evaluate their performance and improve," he says.

Whether the data will be admissible in malpractice cases is one concern, especially as admission would be counterproductive to the proactive purpose of the black box technology. Currently the United States Healthcare Quality Improvement Act doesn’t allow peer-reviewed data used for improvement purposes to be used in court. However, if the data has not undergone peer review, it is admissible and can be used as evidence.

For now, the black boxes will undergo further testing in Canada, Denmark, and South America. According to the report, talks are also underway with U.S. hospitals for testing purposes. If accepted by physicians, the black box could be implemented right away, as it is not yet regulated by the U.S. Food and Drug Administration.