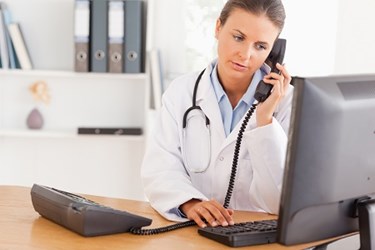 By 2018, more than 22 million families will use in-home video conferencing to consult with their physicians

A report from Parks Associates predicts that by 2018, about 22.6 million households will use video conferencing for consultations with their doctor. That’s a significant increase, considering this year only 900,000 households used that type of technology. According to MobiHealth News, previous data from Parks Associates says the revenue associated with video consultations will increase from less than $100 million this year to over $13.7 billion by 2018.

The report found that only 11 percent of U.S. broadband households prefer consulting with their doctors via video conference, compared with:

According to the report, those most likely to use online healthcare tools are between the ages of 18 and 34 and have household incomes of $50,000 or more. Parks Associates claim there will be a decrease in office visits due to such technology, but another study found patient portal use had no effect on frequency of office visits.

“All types of healthcare providers, from hospitals to physicians, need to embrace virtual care to ensure its success,” said Harry Wang, director, digital health research, Parks Associates in a press release. “Next-generation cloud-based technologies will enable providers to tailor remote care programs to specific populations so they can cost-effectively move patients from an acute-care setting to self-managed behavior.”