Wireless networks have been common in hospitals for well over a decade, but the last few years have seen an exponential increase in both the variety and number of devices operating on those networks. Also increasing have been the number of clinical devices now communicating wirelessly and the number of physicians and other staff using both hospital-owned and personal mobile devices. Throw in a proliferation of guest networks adding hundreds or thousands of devices to the load each day, and it becomes painfully obvious how an aging wireless network can bog down. 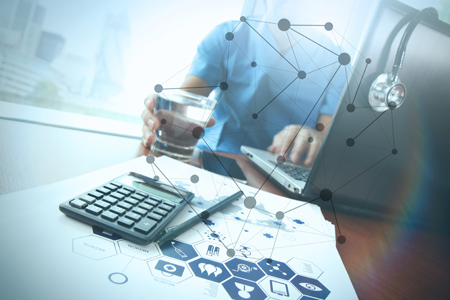 Wireless networks have been common in hospitals for well over a decade, but the last few years have seen an exponential increase in both the variety and number of devices operating on those networks. Also increasing have been the number of clinical devices now communicating wirelessly and the number of physicians and other staff using both hospital-owned and personal mobile devices. Throw in a proliferation of guest networks adding hundreds or thousands of devices to the load each day, and it becomes painfully obvious how an aging wireless network can bog down.

Boston Medical Center (BMC), a private, 496- bed, not-for-profit academic medical center in Boston, upgraded its wireless network and not only improved coverage and bandwidth, but also enabled the deployment of new mobile apps that provide location and navigation services for staff and visitors.

Network Expansions Push Capacity
The hospital’s existing wireless network was approaching maximum capacity as the number of mobile devices on the network increased. The network supports more than 450 computers on mobile carts used in the medical center to record patient data, as well as personal mobile devices of both staff and visitors. According to Craig Reise, manager of Infrastructure Engineering, Information Technology Services, some 3,000 devices access the network daily.

The existing wireless infrastructure was becoming unreliable, resulting in dropped connections and poor roaming, and it was becoming a challenge to integrate new types of mobile devices on the network. These problems, as well as the prevalence of dead zones, put a strain on the hospital’s limited IT staff.

The hospital earmarked more reliable and pervasive coverage as part of reshaping the campus during the hospital’s redesign. “We had coverage issues in some inpatient buildings because of the construction of the buildings,” Reise says. “The original deployment was several years old, and we were seeing such an increase in wireless devices it wasn’t keeping up in terms of coverage or speed.”

The new wireless LAN was rolled out in concert with the clinical campus redesign project. The wireless network is being upgraded to Aruba Networks’ 802.11ac equipment in all 30 existing buildings, as well as in renovated and expanded facilities. At the same time, BMC transitioned from multiple EMR solutions to a single EPIC system.

“The EPIC deployment was a major driver, and that led to many infrastructure upgrades that had been deferred,” Reise says. “We took that opportunity to see what else we needed. We moved to Windows 7, which drove an upgrade of our mobile carts as well, and then we looked at the wireless infrastructure.”

An Ongoing Wireless Upgrade
The existing wireless system from Aruba Networks had performed well, so the hospital opted to stick with the vendor and update to its latest Gigabit Wi-Fi equipment, including Aruba 220 Series 802.11ac Access Points, 7200 Series Mobility Controllers, the AirWave network management solution, and the ClearPass Access Management solution for mobile device authentication. There are approximately 1,100 802.11ac devices already deployed at the campus, including 800 access points.

According to Reise, the hospital opted to provide coverage from the hallways in order to minimize disruptions in the patient rooms. They used Aruba’s mapping tool to put together potential layouts and determine the density of the access points. The e team ran new cabling to support Aruba’s new Gigabit equipment as well.

BMC upgraded the network in the inpatient part of the hospital first, where the EPIC deployment began. “A year later we converted the outpatient areas to EPIC and started their cabling and access point upgrades,” Reise says. “That was easier because there’s not 24/7 activity there.”

There are still some administrative buildings that have not been upgraded, but the IT team is working with the facilities department to ensure the new infrastructure is deployed in conjunction with their activities as the $300 million campus redesign continues. “We are working closely with the design, construction, and clinical teams to ensure we can properly support new applications for staff communication and location-based services,” Reise says.

“Constant Stream” Of Trouble Tickets Slows To A Trickle
The new infrastructure provides greater bandwidth, coverage, and security for the existing network of users. The hospital also uses AirWave for network visibility and troubleshooting, which has made it easier for the IT staff to manage the wireless system without additional labor and equipment costs.

The upgraded management software also has more features than the previous solution. “We have full visibility of what devices are connected to the network and what they are doing,” Reise says. “That has been a big help with troubleshooting.”

In the clinical areas, the IT staff has been able to address connectivity issues for the mobile carts, which has reduced the number of dropped connections and IT calls. “We have different generations of mobile carts, so when someone reports a problem we can tell if it’s an old cart or a new one, and we know before we even send anybody out what type of issue it is going to be,” Reise says.

That has led to a significant decrease in trouble tickets related to the network. “As the manager of the network team, I can tell you that we have gone from a constant stream of complaints to about one ticket per week for wireless issues, and that the nature of the call has changed substantially from ‘all the carts are down’ to ‘we lose connectivity if we go around this corner,’” Reise says.

BMC also purchased Aruba’s Meridian mobile app platforms to help staff , patients, and visitors find their way around the sprawling campus and access other information and services. People who download the wayfinding app on their mobile device can access a campus map and real-time location data to find their way to different departments and facilities. “We have multiple buildings spread over several city blocks,” Reise says. “This will help people get where they need to go.”

Additionally, the network upgrade increased capacity for both the clinical solutions and for the wireless guest network. On the security front, BMC is in the process of deploying the Aruba ClearPass Access Management solution, which will provide new security capabilities and controls. “We have some medical devices that don’t support 802.1x, and some just barely support it,” Reise says. “As medical devices are upgraded, ClearPass will help us manage that better.”

Right now, Reise says 99 percent of devices on the network are BMC-owned devices, but that could change as well. “We’re not doing much BYOD [bring your own device], but we are looking at some of the EPIC modules around mobile devices,” Reise says. “We’re waiting for new policies and procedures to be completed before we expand that. There are pockets of non-BMC devices that have been granted access into applications based on rank or role. In that case we use a mobile device management solution so we can control certificates and remotely wipe the device if it’s lost or stolen.”

With a more robust and reliable network, new wireless applications are emerging on the campus. The network now supports a wireless application for parking valets, for example, and the facilities department uses the network for its wireless work order system. “There are a lot of creative new applications coming out of the woodwork to help BMC deliver exceptional care and service to our patients,” Reise says.

Enter your credentials below to log in. Not yet a member of Health IT Outcomes? Subscribe today.