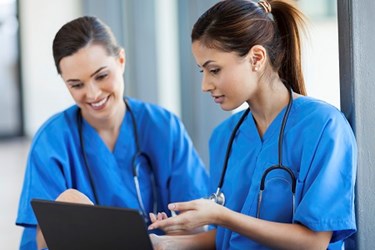 Survey Shows 95 percent of nurses own a smartphone

Nurses both own and use smartphones as a way of improving patient care than doctors according to an InCrowd study.

Nurse smartphone use was dominated by access to drug interaction information, clinical data, drug information, and researching variousdiseases and disorders. Nurses also used smartphones to keep in touch with colleagues (69 percent) or for fast access to patient care information across a wide range of daily nursing tactics, including receiving patient photos of a rash or setting timers for administration of medications.

“The hospital gets very busy and there isn’t always someone available to bounce ideas off of,” said one respondent. “It’s often easier to get the information needed using my smartphone – I don’t have to wait for a response from acoworker,” said another nurse.

Nurses are using smartphones even when employers do not cover their expenses with 87 percent of those surveyed responding their employers did not cover any of their smartphone-related costs. Only 9 percent were reimbursed for their monthly bill, 1 percent received coverage for the cost of the smartphone itself, and 3 percent were reimbursed for both the cost of the smartphone and their monthly bill. Significantly, less than 1 percent of nurses said their hospital prohibited smartphone use by nurses on shift.

“There’s a lot of untapped potential in the use of mobile apps for nursing,” Judy Murphy, IBM’s chief nursing officer told mHealth News