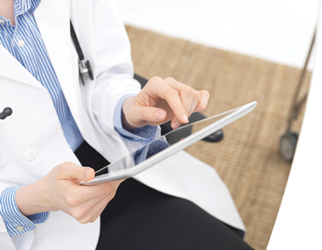 A recent survey shows one-third of patients are open to mobile access of health records; providers who recognize that can be better positioned to meet Stage 2 MU requirements

Stage 2 of meaningful use begins this fall for hospitals and next January for physicians, which means participants will be required to “give at least half of their patients the ability to view and download their own medical records through online portals or personal health records” according to MobiHealthNews. “But more significantly, 5 percent of patients actually have to log in to those portals or healthcare providers will lose out on Medicare and Medicaid bonus payments.”

Fortunately for providers, a recent survey from Harris Interactive and HealthDay indicates “Plenty of Americans are eager to use their mobile phones and tablets to better manage their health care.”

According to the survey, "more than one-third of respondents who are online said they were 'very' or 'extremely' interested in using smartphones or tablets to ask their doctors questions, make appointments or get medical test results." Similarly, one in three also showed interest in using mobile devices for actual medical testing such as monitoring blood sugar for diabetics or blood pressure for those suffering from hypertension.

Harris Interactive/HealthDay writes, “The survey results show that the demand for digital assists to health care is ‘strong and likely to grow,’ according to Humphrey Taylor, chairman of The Harris Poll.” Respondents did, however, express concerns about security with only half saying they were “somewhat confident” in the security of electronically transmitted medical information.

While it seems patients are warming to the idea of using apps to access to their electronic health records (EHRs) through smartphones and tablets, providers aren’t out of the woods yet. According to Titus Schleyer, who heads the Center for Biomedical Informatics at the Regenstrief Institute, based at Indiana University-Purdue University in Indianapolis, “This poll shows us that the public is interested in using these apps. But the health-care system has to make it easier for them to do it."

EHR Intelligence’s analysis of the survey draws a similar conclusion. “Smartphone and tablet owners are ready and willing to use their devices to connect with their physicians,” the authors write, “but the demand is outpacing the number of providers equipped to handle mHealth communication.”