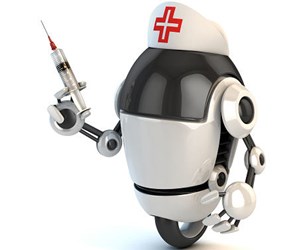 According to Computerworld, remote roboticsurgery performed hundreds or even thousands of miles away from the physician at the controls is possible and safe. Roger Smith, CTO of Florida Hospital Nicholson Center in Celebration, FL reports tests between his facility and a partner facility in Ft. Worth, TX revealed lag times ranging from 30 to 150 milliseconds – so quick that surgeons could not detect any lag as they moved remote robotic laparoscopic instruments.

“Based on these tests, we have determined that telesurgery is possible and generally safe for large areas within the United States,” said Smith. “Limitations are no longer due to lag time but factors associated with reliability, social acceptance, insurance, and legal liability.

“These results indicate that modern, well-connected facilities possess the communication bandwidth needed to safely perform telesurgery today,” Smith said. “It appears that we have the technology, but we are still waiting for business cases and regulatory permissions to open the door for telesurgery.”

According to mHealth News, the tests – performed using a surgical simulator called a Mimic – will be performed as if operating remotely in Denver, CO and Loma Linda, CA. The Mimic Simulator system enables virtual procedures performed by a da Vinci robotic surgical system, used for hundreds of thousands of surgeries every year around the world.

The tests were funded by a $4.9 million grant from the Department of Defense, and the study, which began in 2011, put more than 100 volunteer surgeons through a telesurgery simulator connected to the da Vinci robotic surgery system.

With a da Vinci system, surgeons can perform operations yards away from a patient, even in separate but adjoining rooms to the OR. By stretching that distance to tens, hundreds or thousands of miles, the technology could enable patients to receive operations from top surgeons that would otherwise not be possible, including wounded soldiers near a battlefield.

One major obstacle for long distance telesurgery remains internet resilience, ensuring that an internet connection would not be lost or bogged down in the event of a major news announcement or event. But Smith asserts the benefits outweigh the risks, and said there is tremendous potential for the robotic surgery. “It appears that we have the technology, but we are still waiting for business cases and regulatory permissions to open the door for telesurgery,” Smith said.