Based on official statistics, the federal EHR incentive program known as Meaningful Use has been highly successful. However, many providers beg to differ.

Through the end of 2013, more than 78 percent of office-based physicians had some form of EHR in place, up from just 17 percent a decade earlier, according to the Centers for Disease Control and Prevention. There was steady growth throughout the 2000s, but a big acceleration in 2012, a year after Meaningful Use (MU) payments started.

Based on a survey by the American Hospital Association and the Office of the National Coordinator for Health Information Technology (ONC), an impressive 94 percent of U.S. hospitals had acquired technology by the end of 2013 that was certified to MU standards, compared with 72 percent two years earlier. More than 59 percent had installed and were using at least a basic EHR system in 2013, versus 16 percent in 2010, the year before MU began.

Based on official statistics, the federal EHR incentive program known as Meaningful Use has been highly successful. However, many providers beg to differ. 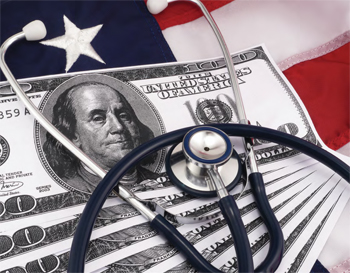 Through the end of 2013, more than 78 percent of office-based physicians had some form of EHR in place, up from just 17 percent a decade earlier, according to the Centers for Disease Control and Prevention. There was steady growth throughout the 2000s, but a big acceleration in 2012, a year after Meaningful Use (MU) payments started.

Based on a survey by the American Hospital Association and the Office of the National Coordinator for Health Information Technology (ONC), an impressive 94 percent of U.S. hospitals had acquired technology by the end of 2013 that was certified to MU standards, compared with 72 percent two years earlier. More than 59 percent had installed and were using at least a basic EHR system in 2013, versus 16 percent in 2010, the year before MU began.

To date, more than $28 billion in incentives has been paid out, but many are struggling to make the step from Stage 1 to 2 MU. Interoperability is nowhere near where Congress or the Obama administration had hoped when they created MU with the enactment of the HITECH Act in 2009. Provider groups are asking CMS to shorten the 2015 reporting period to 90 days rather than the full year, and CMS said in January that it will pursue rulemaking to incorporate this change.

That leads to the big question: Just how meaningful is MU anyway?

Small Practices Require More Financial Support To Make MU Work
“Think of one traveling down an unbeaten path. You’re not sure where you’re going,” said Dr. Donald Moore, a solo practitioner in Brooklyn, NY. “Then someone comes and builds a highway, and that speeds you up.” That, to Moore, is what MU has been about.

“MU gave us a paved pathway to continue and guide our EHR journey,” he explained. “I bought into that concept. I didn’t do it for the $44,000 in incentive funds.” 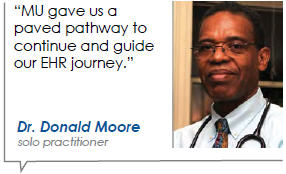 Indeed, that money has not come close to covering his investment from a purely financial standpoint. Back in 2005, Moore had an initial outlay of $80,000 for his Greenway Intergy EHR (formerly Sage and Vitera), plus $20,000 more to customize and optimize his system. He has had to come up with several rounds of additional EHR funding since the first installation.

Moore, cochair of the health IT committee of the Medical Society of the State of New York, has had an EHR for nearly 10 years and has been completely paperless since 2007, long before the advent of MU. “I’ve been playing around with computers since the 1990s,” Moore said. “I’m not a computer geek; I just decided it was best to get rid of paper.”

However, he expressed the belief that the technology needs to be paid for, either through efficiency gains or more subsidies from payers, whether government or private. Moore would like to see additional funds to develop the modules necessary to move from Stage 2 to Stage 3.

In order to achieve Stage 2, Moore’s practice had to make a connection to the New York State Department of Health, and that required a custom workaround. Greenway has since made the connection, so Moore expects to have to buy the new module when he upgrades his current EHR, which will be another expense.

“I still think more MU support is needed for physicians practices,” Moore said. “Money is the primary obstacle. If record-keeping can improve care, and I believe it can, it’s still secondary.” Until that problem is fixed, small practices will continue to struggle.

“It’s not economical for physicians to participate in MU,” Moore said. “It might work if you had 100 physicians in the practice because of economies of scale, but a solo practitioner like me does not get to spread the investment around.”

Even with an EHR, it is difficult for practices to measure individual patient outcomes, something that likely will be necessary in Stage 3, starting in 2017. Moore has made it work by reprioritizing his schedule. The Stage 2 requirement to produce visit summaries for patients has given Moore the motivation to document encounters in near real time. “If I don’t do it right there, it’s not going to get done,” he said.

He now can go to a hub via the EHR and see which prescriptions have actually been filled, but other physicians may not take the time to manage patients this way if they are not being paid for this service. “I am CEO of this single-doctor practice. I have given myself the time,” Moore said.

Though he completed a residency in surgery in the 1980s and later became board-certified in emergency medicine, Moore operates more like a general practitioner. He manages many of his complex patients when they are hospitalized and also does about 10 house calls a week for homebound patients.

Moore stopped taking commercial insurance nearly three years ago, but invited patients with private coverage to continue with him on a concierge basis, which includes videoconferencing and telephone consultations. Moore describes his office as a “single-payer practice” because he does take Medicare and Medicaid.

Moore’s patients tend to be complex, with multiple chronic diseases, so he tries to average 1.5 per hour, whereas the typical primary care physician in fee-for-service might rush through five per hour. Under his previous model, his hourly rate was about 2.2 patients. “I was never a high-volume practice,” Moore said. “To do MU and PQRS [the CMS Physician Quality Reporting System] and to do quality, it takes time.”

The practice of medicine has changed over the course of Moore’s 30-year career. When he was training to be a physician, referrals were opportunities for primary care doctors to introduce patients to specialists. “Managed care turned the referral into a coupon to go see a specialist,” Moore said. “MU, on the other hand, requires physicians to pay attention to care transitions.” Still, in the absence of true interoperability, Moore has to print and either mail or fax summaries to specialists.

“The Internet is not a secure place to transmit my personal information, let alone patient data,” he said. “MU has made some strides in this regard, but in many ways, dated communications technologies [such as fax machines] are still more secure than electronic data interchange.”

MU Shouldn’t Be One Size Fits All
South Carolina Heart Center, with six practice locations in and around Columbia, SC, first attested to MU in 2011 and continued for all three years of Stage 1. In 2014, the practice attested for 19 cardiologists — two new physicians to the Stage 1 requirements and the rest to Stage 2.

Some of the doctors stayed on 2011-certified technology in 2014 when CMS instituted a “flexibility” rule last summer in response to the slow pace of vendors earning 2014 certification. South Carolina Heart Center currently leverages the NextGen Healthcare Information Systems EHR, and its CIO, Sherry Shults, has mixed feelings about MU.

“I think MU serves a purpose, but CMS needs to be more realistic about it,” she said. “It has been meaningful because it has driven us to improve our communication with patients. Through this process, we’ve discovered that patients like being active participants in their care.”

The MU requirement to make records and test results available to patients electronically, typically via a Web portal, has forced providers to ensure that patients really are receiving health information. Shults said that many of South Carolina Heart Center’s patients have corrected records, including drug lists, after viewing their charts through the portal, improving the accuracy of the patient information on file.

The cardiology practice has a policy of making laboratory results available within three days of the doctor signing off; MU sets a four-day limit. “Our patients generally like receiving their lab results online,” Shults said.

Shults generally likes that Stage 2 calls for computerized physician order entry for 60 percent of medication orders, 30 percent of lab orders, and 30 percent of radiology orders. Electronic prescribing in particular has been a big time-saver for practice staff and, like accurate drug lists, helped with medication reconciliation. However, Shults questions the requirement that images must accompany radiology reports that go back to referring physicians because she’s not sure what purpose it serves.

Shults also agrees with the common MU criticism — one acknowledged by the ONC — that MU is skewed toward primary care. Many of the registries providers can choose from to comply with MU are irrelevant to specialists. For example, cardiologists cannot report to immunization registries because they do not normally provide immunizations.

A serious flaw of MU, in the opinion of Shults, is that it essentially is pass-fail. If a hospital or physician misses the threshold on even one item, that provider is considered not to be a meaningful user and gets financially dinged by Medicare. “I just don’t think MU is as fair as it should be,” said Shults. “You could meet all of the other criteria, but still get penalized because you struggled with a single requirement.”

Specifically, the requirement that 5 percent of patients log in to a portal and send unsolicited messages is difficult for providers to achieve, especially in areas that are poor, rural, or overrun with elderly patients who either do not have Internet access or are not computer- literate. CMS hardship exemptions do not apply as long as Internet service is available in a geographic area, regardless of whether patients purchase it or not.

“If you’re going to penalize providers, penalize them for things they have control over,” Shults said. “We can’t really dictate whether or not our patients use the Internet. This is one of the biggest faults of MU to date in my opinion.”