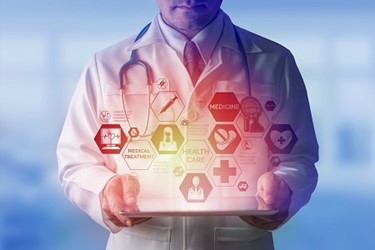 Artificial intelligence (AI) is known for using Big Data to detect anomalies in medical imaging, predict health outcomes, personalize treatment plans, even perform robotic surgery. One of the newest entrants to the AI movement is a form of “conversational AI” aimed at helping restore the doctor-patient relationship by alleviating the documentation burden.

Few would argue the quality of the doctor-patient relationship has been declining in recent years. A study by The Doctors Company showed that 54 percent of doctors believe the doctor-patient relationship is negatively impacted by EMRs and that EMRs cause frustration for both parties. Doctors report having a difficult time entering data to a computer while also observing the patient.

The authors of The Doctor-Patient Relationship With Artificial Intelligence, published February 2019 in the American Journal of Roentgenology, described the potential of AI to address this critical issue: “Our most important role as physicians will be cultivated as AI alleviates the burden of performing the numerous tedious, repetitive, and often difficult tasks that physicians face, such as adding documentation to electronic medical records. AI may allow us to be more attentive to our patients and listen to their concerns instead of attending to documentation on the electronic medical record.”

Conversational AI is well suited to helping doctors realize this aspirational outlook. Voice-enabled technology can listen to conversations between doctors and patients that occur naturally during an encounter, whether in person or through a telehealth platform. The AI then captures, interprets, and transforms the content required for the medical record, such as a SOAP note. No command language or trigger words are used, doctors just speak normally.

This type of AI serves as a catalyst for medical visits that are free of the distractions, demands and interruptions commonly present when doctors are tasked with documenting in the EMR concurrent to the exam itself.

Documenting in the EMR also eats into visit time. A study published in the Annals of Medicine observed that doctors spend nearly twice as much time doing administrative work as they do seeing patients: 49 percent versus 27 percent. Inside the exam room, about half their time is spent in face-to-face discussions and care, while 37 percent is spent on EMR and other administrative work.

Eric Topol, MD, author of Deep Medicine: How Artificial Intelligence Can Make Healthcare Human Again, recently said in a Tech Talks interview: “AI-derived notes from natural language processing and machine learning are quite remarkable. AI could be the greatest way to improve and restore the patient-doctor relationship, because of the gift of time.”

So, imagine doctors having an additional six minutes inside a customary 12-minute visit to devote wholly to the patient . . . to ask the questions, do the screenings, and explore the options that make the difference between good care and great care. They wouldn’t have to worry about documentation or feel like they’re racing against the clock. As importantly, patients wouldn’t feel rushed, but rather listened to and heard.

This ideal state was captured by the authors of a JAMA Viewpoint article, Promoting Trust Between Patients and Physicians in the Era of Artificial Intelligence: “Through greater automation of low-value tasks, such as clinical documentation, it is possible that AI will free up physicians to identify patients’ goals, barriers and beliefs, and counsel them about their decisions and choices, thereby increasing trust.”

EMRs were designed with billing in mind, not physician efficiency, so it goes without saying that if technology can help alleviate the documentation burden -- allowing doctors to spend more time with patients and deliver higher-quality care -- everybody wins.

The good news is, that technology has arrived.

Graham Hughes, MD, is the President and Chief Medical Officer of Saykara, a Seattle-based startup on a mission to liberate doctors from the documentation burden through conversational AI. You can learn more about Saykara at www.saykara.com.