Implementation of electronic billing in revenue cycle management is aiding providers such as Baystate Medical Center in their efforts to meet new healthcare reform laws and keep up with ICD-10.

It’s common knowledge that paperless systems save time and money for healthcare providers. But electronic billing also gives them an advantage when it comes to implementation of new regulations and keeping their finances in order through their payors. Healthcare Finance News says that the average hospital loses 3 to 5 percent of its annual revenue to underpayments; however, monitoring payors and claims through an analytics system keeps that loss in check. In addition, electronic billing reduces staff size, eliminates redundancy, and improves accuracy.

Woes Of Paper-Based Claims
Baystate Medical Center in Springfield, MA, is one of a network of hospitals that decided to make the switch to electronic billing. Baystate is a 716-bed facility that treats the most critical cases in western Massachusetts and runs the second-busiest emergency department in the state. To start the electronic billing process, Baystate chose to use The SSI Group, a claims management technology provider. Charlene Czernich, business systems support manager at Baystate, says that prior to the SSI installation Baystate had the power to bill only its largest payors electronically. The hospital used an outdated system that didn’t allow changes to claims forms, and because claims were system-generated, no previews were available. To make changes to even basic demographic information, an entirely new claim had to be opened, and even then, specific information (like codes) was often unable to be modified in the system. Any data changes had to be done manually.

Furthermore, not only were a large portion of the hospital’s claims on paper, they were often redundant with multiple submissions. Office staff had to manually enter claims into individual, payorspecific programs or make corrections to paper claims.

Electronic Billing Eliminates Manual Processes
During Baystate’s electronic revenue cycle management (RCM) implementation, it also added the Siemens Invision Patient Management/Patient Accounting System. Two of its hospitals were updated with SSI and Invision, and two years later another hospital in the Baystate system and a reference laboratory were also outfitted with these applications. As Czernich explains, these updates reduced time employees spent correcting claims and made the billing process more efficient, by eliminating redundancy and allowing electronic claims submission.

“We originally went live with SSI Apex Shared (claim scrubber) and Direct, which allowed us to transmit our own claims,” Czernich explains. “We transitioned to ClickOn, then to a SQL Server version, then added Accelerated Secondary Billing and the ClickOn Claim Status Module.” Adding the ClickOn Claim Status Module allowed the billing department to check claim status on secondary billing and ensure timely edit resolution and secondary billing of those claims. 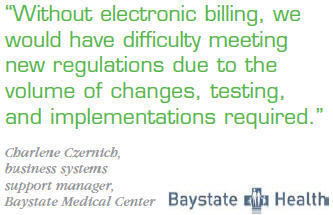 “We are also using ClickOn LinX, which passes information back to the Siemens Invision System in systemspecific record formats. ClickOn Remote Hosted also houses our Audit, Report, and ClickOn Claim Status Modules within the same application,” she continues.

When first converting from a paper-based system to an electronic version, Baystate encountered missing claims and truncated files. Despite the glitches, the transition went smoothly. According to Czernich, “The SSI installation staff were knowledgeable and helped us identify the issue causing the problem in our system so that we could have our files corrected.”

As soon as SSI technology was applied, Baystate stopped producing paper claims as much as possible and discontinued maintaining paper copies as backups, since all claims were archived in the SSI system. This eliminated much of the sorting, distributing, mailing, and filing that had occurred previously. “The people who were performing those tasks in the past were redeployed to other productive tasks,” Czernich explained. “We wanted to leverage the editing in the system to ensure clean, compliant claims, plus, we wanted to have control over our electronic billing to make sure that all claims successfully transmit to the payors.”

Reaping The Benefits Of Updated RCM
The benefits of this new electronic system included more than just easy claims submission. Three business offices were combined into one, and staff was reduced from a combined total of 130 to the current level of 78, a 40-percent decrease. Since entering claims has been simplified, more staff members are able to focus on follow-up rather than initial claim submission. Despite the number of receivables having doubled since Baystate first installed electronic billing, the number of accounts receivable days has gone from the low sixties to the mid to upper thirties.

After the hospital eliminated paper claims, Czernich says, “We also leveraged more of the electronic payment posting available. Over the years, our main goal with electronic billing is to constantly seek more ways to automate a variety of functions so that staff time can be devoted to problem accounts.”

The Remote Hosted feature is most valuable to the hospital as it allows focus to be shifted to system enhancements in order to gain greater efficiency. “We are now able to implement new edits to enhance compliance, and we also take advantage of things like automating more secondary billing, implementing esMD (electronic submission of medical documentation) for automating Medicare ADRs (additional documentation requests), and securing medical records submissions to Medicare,” explained Czernich.

In addition, with new regulations constantly changing how healthcare technology operates, having an RCM system such as SSI makes testing for updates easier on all staff. As Baystate must implement new HIPAA requirements all of the time, SSI stays ahead of these changes and assists in the testing of new requirements. In the past, the hospital has converted to 4010- and then 5010-billing formats to maintain HIPAA compliance. Using SSI technology has made it easier to convert to these formats via the system’s electronic updates.

Currently, the hospital is preparing for ICD-10. To keep up with coding requirements, Baystate will be testing ICD-10 coding and assessing its revenue impact by submitting test claims. These test claims need to go through the entire revenue cycle process, from registration to charging, coding, and claim submission. From the claims production standpoint, ICD-10 compliance will be timely, and Baystate has the ability to build edits based on denials history — effectively reducing future denied claims.

Czernich sees SSI as a valuable addition, not only to ease the claims process, but also to keep up with changing regulations. “Without electronic billing, we would have difficulty meeting new regulations due to the volume of changes, testing, and implementations required. But by using this new system, we are reducing much of the implementation pain and cost when new challenges crop up.”