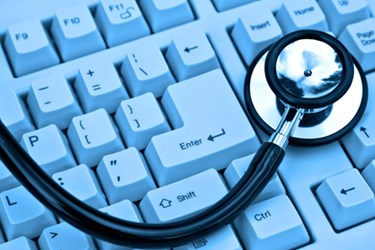 EHR adoption rates are ahead of the Department of Health and Human Services’ schedule, but pockets of resistance still remain.

The Department of Health and Human Services (HHS) announced recently it has exceeded its goal of 50% of doctor offices and 80% of eligible hospitals having electronic health records (EHRs) by the end of 2013. “We have reached a tipping point in adoption of electronic health records,” said HHS Secretary Kathleen Sebelius. Adoption by physicians began a steady increase about two years ago, as illustrated here.

The rapid pace of EHR adoption may come with a downside, however, as long-term adoption rates could suffer because of “rampant physician dissatisfaction” according to SRSsoft chief executive officer Evan Steele. Physicians who have yet to sign on to EHRs are “frozen in their tracks” having been spooked by colleagues’ horror stories of workflow disruptions and productivity losses.

The fear could simply be rooted in the notion that computers will somehow interfere with patient communication, according to a Kaiser Permanente International study. This fear of technology and the cost of implementing EHRs are two obvious barriers to universal EHR adoption, but others – such as the lack of technical skills and shortage of time – may be just as important hurdles to overcome.

The Kaiser Permanente study suggests age also plays a part in EHR decisions. Of the 54% of physicians who had adopted an EHR system in 2011, 64% of those under age 50 were adopters while only half of those over age 50 chose to use EHRs.

Practice size also played a role in the likelihood of EHRs being utilized with larger groups far more likely to participate than smaller groups. Adoption rates rose steadily from 29% of solo practitioners to 62% of physicians in 3-to-10 doctor practices to 86% of physicians in practices with 11 or more physicians.

As a group, family physicians were quick to embrace health IT’s role in patient care, according to Jason Mitchell, director of American Academy of Family Physicians (AAFP) Center for Health IT. Writing for American EHR, Mitchel says family physician’s adoption of health IT has been “a linear rise over the last 10 years” and, “By the end of this year, over 80% of AAFP members will be using EHR systems in their ambulatory practices.”