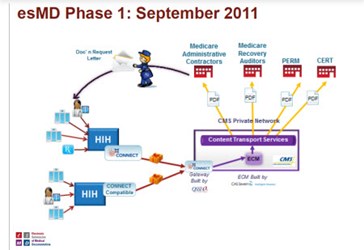 Nearly half a million records were shared through esMD in 2013, according to CMS

In 2011, CMS implemented the Electronic Submission of Medical Documentation (esMD), a system based on standards developed by the Office of the National Coordinator for Health IT which enables providers to send medical documentation to Review Contractors electronically.

Prior to the 2011 esMD implementation, providers had only two options to submit the requested records: sending a letter or fax. According to CMS, “Providers often criticized the paper-based process as being costly and time consuming. Many providers, especially those who use electronic health records, requested an electronic means to respond to these documentation requests.”

Now, CMS press release notes the esMD system has enabled providers and suppliers to share nearly half a million records with Review Contractors during Fiscal Year 2013. “While esMD is not mandatory, many healthcare providers find that it reduces cost and increases efficiencies. In order to address provider concerns, CMS has instructed Review Contractors not to target providers for medical review based on their use of esMD,” explained the announcement.

According to EHR Intelligence, “More than 457,844 medical records have been submitted to Review Contractors through the online portal. More than 30,000 Medicare providers have used esMD to respond to a request as of the end of September, 2013, and 27 Review Contractors have been approved to accept the data.  From the beginning of 2013 to the end of the year, use of the system nearly tripled.”

The next move for CMS is “to expand the system’s capabilities to include the ability to submit first level appeals requests and discussion requests online.  While esMD currently only accepts unstructured PDF documents, the submission of structured electronic clinical data is next on the list.

“‘CMS has been working closely with the Office of the National Coordinator through the Standards and Interoperability Framework to develop these data elements,’ the announcement says, noting that prior authorization requests for power mobility devices (PMD) was a feature added to the system during the past year. ‘CMS is exploring the development of an Electronic Clinical Template that would allow electronic health record vendors to create prompts to assist physicians when documenting the medical necessity of a PMD.’”

Government Health IT further reports CMS “also wants to offer physicians the use of an esMD clinical template for documenting the medical necessity of lower limb prostheses, an area that’s advancing in technology, in part thanks to returning Afghanistan and Iraq military members, but also has been highlighted for improper payment risks. Finding ‘questionable billing’ practices by some suppliers, the HHS OIG estimated that Medicare made at least $43 million in unnecessary payments in 2009 for leg and foot prosthesis.”