Are Community Hospitals Behind The Health IT Curve?

Not surprisingly, our survey indicates that financial and resource challenges limit the IT investments community hospitals can make. Are these facilities making shortsighted technology decisions as a result?

Healthcare reform and increased IT demands are taking their toll on providers of all shapes and sizes. Fortunately, larger health systems seem to have the resources (both financial and human) to make the necessary investments and transitions without putting their organizations at risk. Independent physicians’ practices, on the other hand, seem to have some options at their disposal. For instance, they can elect to cut ties with Medicare and go into concierge medicine, or they can opt for early retirement. Community hospitals, however, seem stuck somewhere in the middle. They have limited budgets and resources, and they can’t afford to split from Medicare. 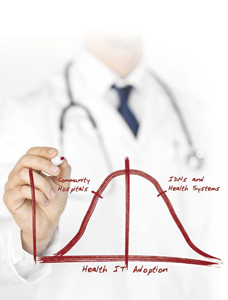 In an effort to gain greater insight into how community hospitals are faring in this changing healthcare landscape, Health IT Outcomes recently conducted a survey of 100 leaders from community hospitals throughout the U.S. to assess their top IT challenges, priorities, and trends. Many of the survey results aren’t all that surprising. For example, no one will be shocked to learn that cost pressures were cited as the biggest challenge facing community hospitals as they strive to implement health IT. However, what was interesting is how community hospitals are responding to these cost pressures. In many instances, it seems like limited budgets are forcing community hospitals to make some tough technology-related decisions — decisions that appear more focused on shortterm returns (or absolute necessity) rather than ensuring the long-term success of their hospitals. After reviewing the survey results and interviewing several of the respondents, I question whether the tough decisions being made are the best ones for community hospitals and their patients. I fear many of these providers may be headed down a path that not only places them behind the health IT curve today, but keeps them there for years to come.

Tech Costs Crush Community Hospitals
We first asked our community hospital representatives to identify which health IT implementation challenges are causing the most pain for their organizations. Respondents were presented with a list of six common health IT pain points (initial costs, ongoing/maintenance costs, lack of IT resources, lack of interoperability standards, acceptance by clinical staff, and inability of technology to meet hospital needs) and asked to rank each from 1 to 6 — with 1 being the biggest challenge and 6 being the challenge that impacts them least. Not surprisingly, the costs associated with a health IT implementation were cited as the biggest challenge facing community hospitals — with initial capital costs being ranked the first or second biggest pain point by 66.7 percent of respondents and ongoing/maintenance costs receiving this designation by 46.6 percent of respondents. What is alarming is just how taxing the financial demands of health IT adoption have been on community hospitals.

“Moving from a paper-dominated environment to a digital landscape requires much more than an investment in EHR software,” says Jason Thomas, CIO of Green Clinic Surgical Hospital (part of Green Clinic Health System). “We needed to install 300 new PC workstations, hundreds of laptops, a new wireless network, and several other ancillary systems to support our EHR implementation. This was a massive up-front capital expense.”

As crippling as the initial costs are, many of the community hospitals seem more concerned about the impact ongoing IT maintenance costs will have on their hospitals over time. “The IT maintenance costs that come along with an EHR implementation are much more than we bargained for,” says Scott Stewart, manager of IS (information systems) at Rochelle Community Hospital. “For example, the annual software maintenance costs for our new ‘Meaningful Use [MU]-certified’ EHR system are more than triple that of our previous EMR solution. Our hardware maintenance costs have increased tenfold. Unlike the initial capital expenses related to an EHR investment, these aren’t expenses that can be recouped with MU incentive payments. They are simply the new costs of doing business.”

Click here to review a full summary of our 2013 Community Hospital Health IT Survey results.

Click here to view an infographic illustrating the most compelling results from our 2013 Community Hospital Health IT Survey.

Sacrifice And Shifting Priorities
According to our survey, community hospitals are taking all kinds of steps — including shifting budgets, hiring new FTEs or consultants, and employing lean methodologies — in an attempt to curb mounting IT cost pressures. A chart reflecting these responses is presented in Figure 1.

However, in my interviews with survey respondents, it was clear that the end result of increased IT costs is that it forces community hospital leaders to make some tough decisions when it comes to expenses. “The push towards EHR MU and the monies we’ve dedicated to that effort have forced us to put a lot of other hospital initiatives on hold,” says Stewart. “For example, we had hoped to upgrade our EKG system to be more compatible with the new cardiology system we recently installed, but since MU dollars aren’t tied to this type of upgrade, we decided to delay it.” 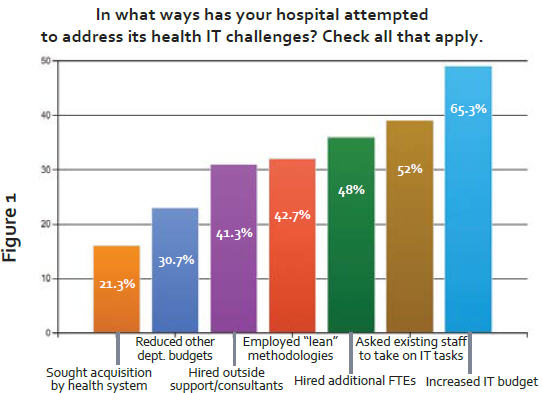 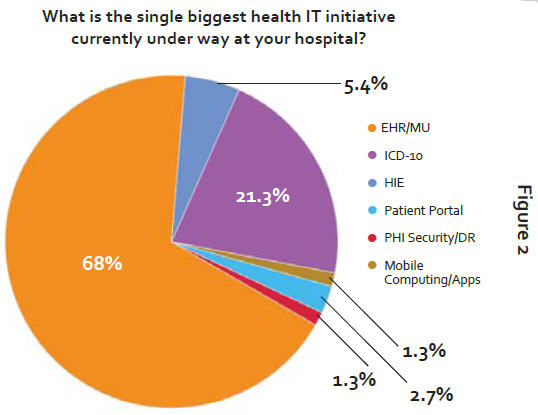 Some community hospital leaders are finding other ways to cut costs and cope with rising health IT expenses. For example, Michael Mistretta, VP & CIO of MedCentral- Shelby Hospital (part of MedCentral Health System), attempts to limit ongoing IT costs by scrutinizing maintenance contracts.

“Most EHR software vendors are still of the mindset that 15 percent to 25 percent is a standard annual maintenance fee on a contract,” he says. “However, most community hospital margins are in the single digits at best, and these types of maintenance contracts just aren’t sustainable in our industry. In order to cope, we regularly perform risk assessments on our EHR-related maintenance contracts and move those with the least amount of risk to a time-and-materials agreement instead of a full maintenance contract. This saves us money on the overall maintenance of our infrastructure, but can expose us to downtime in some areas.”

EHR MU Monopolizes It Mindshare
When we asked community hospitals to name the single biggest health IT initiative currently under way at their organizations, the results weren’t even close. A convincing 68 percent of respondents said that EHR Adoption and MU was their number one priority (see Figure 2).

With all of the federal fanfare and stimulus surrounding EHR MU, I expected it to be the dominant response to this question in our survey. However, I found it troubling to see the extent to which community hospitals are focusing on MU, often at the expense of every other IT-related project in their organizations. For example, with the exception of transitioning to ICD-10 (which finished a distant second with 21.3 percent of respondents citing it at as their top IT-related focus area), every other IT initiative listed received priority designation by fewer than 6 percent of our sample. In fact, two relatively popular technology trends in healthcare (telehealth and BI/data analytics) failed to receive a single vote for top health IT initiative among the community hospitals we surveyed.

For better or worse, community hospitals seem to have blinders on when it comes to EHR MU. Interviews with several of the survey respondents revealed that IT cost pressures are driving this intense focus on EHR MU. In other words, many community hospitals need MU incentive payments to fund other IT investments.

“We couldn’t have performed the IT infrastructure upgrades we did without the ARRA stimulus dollars,” says Thomas. “We used our first round of Stage 1 MU monies to pay off the initial capital investments related to installing the EHR infrastructure. Now, we’re using our second round of Stage 1 dollars to invest in ancillary EHR system upgrades, such as making our RIS (radiology information system), PACS, and other HIS (health information system) solutions EHR-compatible.”

ICD-10 Takes A Backseat
As mentioned, only 21.3 percent of community hospital leaders identified ICD-10 as their top health IT priority. However, this initiative topped the list (receiving 37.4 percent of the vote) when we asked respondents to name their next most-pressing health IT project (see Figure 3). However, it was clear that many community hospitals are concerned about the level of commitment they have given to their ICD-10 transition to date. When asked, only 40% of our respondents felt they were adequately prepared for the ICD-10 transition in October 2014. 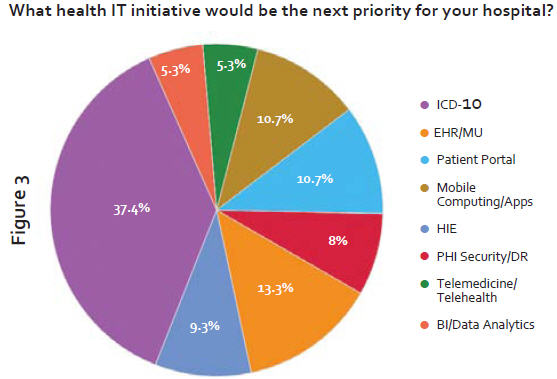 “I have confidence that our ICD-10 applications will be ready by the October deadline, but my biggest fear is that the processes necessary to support our coding efforts might not be in place yet,” says Mistretta. “For example, we’re currently behind on our physician documentation training, and we need to push this out to 250 medical staff. We’re currently lacking in the ‘social reengineering’ aspects of the ICD-10 transition.”

The Repercussions Of “The MU Trap”
While I definitely understand the reasons why so many community hospitals are dedicating their IT resources almost exclusively to EHR MU, I also question this approach. I fear many community hospitals may be falling into “The MU Trap” — meaning that they are so focused on obtaining short-term (and finite) MU incentive dollars that they are ignoring aspects of health IT that will likely have a more profound impact on their organizations in the long run.

Let’s take a look at ICD-10. While the MU Stage 2 attestation period currently precedes the ICD-10 deadline, it’s easy to argue that failing to meet ICD-10 deadlines will have a more catastrophic effect on a community hospital’s finances than failing to meet Stage 2 MU. ICD-10 miscues will directly impact how a hospital gets paid for the care it provides. If patient treatments aren’t documented or coded correctly, claims will be denied and community hospitals run the risk of seeing their cash flow literally dry up. Call me crazy, but this seems like a bigger issue than missing out on a round of MU incentive dollars or even being subject to eventual MU penalties.

John Everett, CFO of Cogdell Memorial Hospital, sees things this way. “ICD-10 is a dramatic change for healthcare organizations, and it is all about clinical documentation integrity,” he says. “Hospitals need to get their staffs educated and trained on ICD-10 today or risk running into major issues in how they are paid come October 2014. We’ll be working on ICD-10 and Stage 2 MU simultaneously, but ICD-10 will be given priority because it will have greater impact on our bottom line.”

In my opinion, “The MU Trap” also gets hospitals in the habit of filling out checkboxes on a list of MU criteria instead of focusing on the IT investments that have the most potential upside for the hospital in terms of cost savings, payback, productivity, effectiveness, performance, and patient care. Ultimately, these attributes can continue to benefit the hospital over time, whereas some MU-related initiatives generate a one-time-only return. It’s important that community hospitals not lose sight of this. Every IT investment community hospitals consider should provide the organization with some measure of ROI.