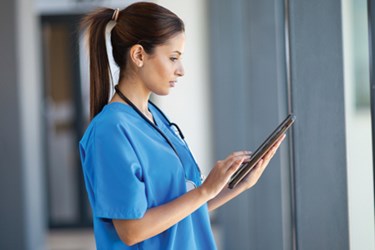 The introduction of better and more affordable mobile technology means tablets are not just for large hospitals anymore; smaller, regional hospitals as well as individual physician practices are fully engaged with tablets as well.

The popularity of tablets - like the iPad - in healthcare is owed to their mobility, affordability, and ease of use. With everything from appointments to patient information at their fingertips in lightweight and user-friendly form, physicians are able to increase efficiency and provide patients with faster care. In addition, communicating with patients is easier than ever with tablet programs that show results of tests in an interactive display. HealthLeaders Media details one such instance, reporting on how tablets are used to show real-time results of EKGs or monitor fetal heart rates.

Tablets give everyone in the hospital the opportunity to have technology in their pocket, rather than scrambling for limited workstations that can’t support an ever-growing staff. For example, using tablets, clinicians no longer have to drag around carts with laptops while making rounds. In the HealthLeaders Media article, Mark Laret of UCSF Medical Center explains his facility plans to expand the use of tablets to, “patient self-registration, MyChart sign-ups, providing educational content in waiting rooms and patient rooms, patient questionnaires, etc.”

In early 2012, mobihealthnews reported that “76% of small- and medium-sized medical and dental offices planned to purchase tablets in the next year.” The article estimated that these practices would spend around $7,000 on tablet technology. When compared to the cost of laptops and the lab equipment they replace, a few thousand dollars for more efficient technology appears minimal.

One year later that prediction appears to have been spot on. A University of Illinois at Chicago survey showed that the percentage of doctors using tablets was even higher than the percentage of the general public using the devices. Results also showed that many of these doctors were “super mobile” users, meaning they used not only a tablet but also a smartphone. In addition to tablets, smartphones are used for messaging within the hospitals and provide a secure route for physician communication.

The advantages of tablets seem unchallenged. While laptops once offered incredible mobility, the tablet is the new standard for that function. The introduction of the iPad Mini in the fall only served to prove this point further as doctors put their practice in their pockets. Apple is not the only company to spot the trend either, Microsoft is focusing on tablet technology more than ever, and plenty of Android-based tablet options are currently availabe. In the next few years we can expect nothing but progress in tablet technology and its applications in healthcare.