How To Make Huge Cuts To Document Scanning Expenses 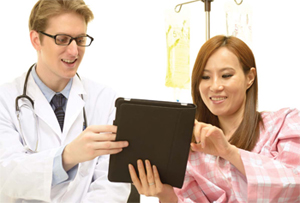 To automate a manual process — that was the goal that Baptist Health set out to accomplish. Baptist Health is located in Jacksonville, FL and is composed of five hospitals in northeast Florida. The network also includes 44 primary care locations, internal medicine physicians, family practices, about 600 home health patients, several retail pharmacies, a network of specialists, and 1,100 beds.

Upon admission to a Baptist Health facility, patients could be expected to sign several documents upon registration — disclosures, explanation of benefits, authorization and acknowledgement forms, Medicare and Tricare forms, and a photo/video consent form — and James Bilsky, Jr., director of enterprise systems at the healthcare organization, wanted to capture these signatures electronically.

“Handling paper documents requires the patient to sign the forms, which get handed off to another department that scans them into the document management system within our Cerner Millennium EMR , thereby turning the physical form into a digital document,” Bilsky explains. “The goal was to achieve that point of digital documentation at the first point of contact with the patient.”

TAKING PROACTIVE STEPS
Of course, the more manual a process is, the more prone it is to mistakes, such as misfiling or losing paperwork. While Baptist Health was not experiencing those issues, Bilsky says he knew they were possible and wanted to take proactive steps to prevent them from occurring rather than have them happen and be forced to take remedial action. “We wanted to take advantage of electronic signature capture technology,” he says.

The first step was to seek out a vendor. Bottomline Technologies had been a partner of Baptist Health for more than 10 years, so that is where Bilsky started his search for an e-form solution. While other solutions were considered, Bottomline was already generating the paper forms Baptist Health was using. That meant the hospital system would not have to develop a new form for a signature solution, but instead, could feed the current form into the Bottomline Patient Signature Capture solution where it could be signed with the system’s toolset.

The Patient Signature Capture solution captures patient signatures digitally at the point of admission. Patients sign the forms on a ClipGem electronic signature capture clipboard from Topaz Systems. After the electronic files are signed, they are automatically attached to the patient’s electronic record, and the data is accessible to authorized users throughout the continuum of care.

OVERCOMING POSSIBLE HIPAA VIOLATIONS
Baptist Health spent one month piloting the software and clipboard at one of its higher-traffic outpatient locations at the end of 2011. Much of the testing involved educating patients about the clipboard they were being handed at the point of admission. One issue that Baptist Health realized almost immediately was that turning the screen toward the patient so they could see what was being signed online could present possible HIPAA violations, says Bilsky. “As patient registration information is displayed on the screen, turning the screen might have disclosed patient information that could have been seen by someone walking by. That was quite a quandary.”

To combat that issue, a sample form was created for each of the nine documents, which were laminated and are placed on top of the clipboard’s screen so that patients could see what they were signing and where to sign. “Basically, they signed right on the laminate, which created a copy of their signature on the tablet,” explains Bilsky. “Otherwise, the patient would have looked at a blank screen. This gave them a picture of the form so they knew what they were actually signing.”

After the first location used the e-signature solution for one month, the solution was rolled out at additional hospitals one at a time. All five hospitals and 35 other Baptist locations are currently using the system, and about 3,000 to 4,000 documents are being electronically signed every day, which has decreased the need to have someone manually scan the forms. In total, 106 devices are being deployed, and Baptist Health invested more than $150,000 in the software and hardware.

COST VS. EASE OF USE
The current challenge facing the organization revolves around the size of ClipGem. Bilsky says he would like to see the device’s footprint minimized from 8½ x 11 inches to make it easier for patients to handle, and to provide the patient an experience more in line with what they see on the physical form. However, he also gets nervous about the patients dropping a device that costs about $500. “It’s a real balancing act to present the form to the patient on the device, knowing that the device could break if dropped and need replacing,” he explains. Baptist Health is discussing options with Bottomline. Even with that slight inconvenience, Bilsky says Baptist Health achieved its goal of eliminating manual scanning.